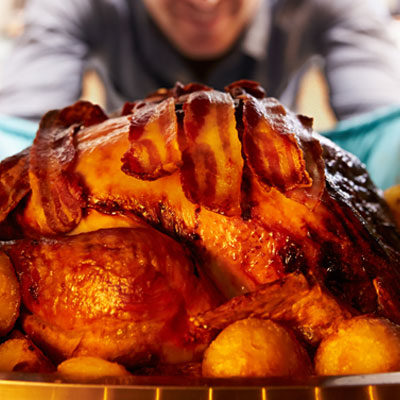 It all started in the 1950’s when Turkey was not a mainstream meat in the UK, as it was too expensive for most families, and only eaten at Christmas by those who could afford it.

One man decided he wanted to make Turkey accessible and affordable for as many families as possible.

In the 1950s turkey was only seen in butchers at Christmas, it was expensive, costing around 2 weeks wages for the average worker.

In May 1950 an entrepreneur called Bernard Matthews bought twenty eggs and a second-hand incubator. 12 turkeys hatched which he sold to a local farmer for the equivalent of £9 today.

In 1955 due to demand and growth, Great Witchingham Hall in Norfolk was purchased, with this came 36 acres of land.  This became the business HQ and home to hatching, rearing and preparing turkeys.

Bernard Matthews entered the Guinness Book of Records as the biggest turkey farmer in Europe.

He was recognized worldwide as THE turkey expert, foreign Governments asked him to for advice on turkey farming

Bringing turkey to the masses! By the 1970’s, more and more women were going out to work, so needed quick, easy meals to cook for their families. Fridges and freezers became the norm in family homes, to help provide convenience in the kitchen.

Bernard Matthews saw this as an opportunity, and began to provide simple, easy to cook fresh and frozen turkey products that were affordable for everyone.

The 1980s, an era of food convenience, households became ever busier, so did the demand and popularity of frozen food. Consumers craved choice, great value products which could be cooked at speed, and enjoyed by the whole family

Always the entrepreneur Bernard Matthews combined advances in food technology, his creative flair to create a variety of different products to meet growing consumer needs.  Products such as the Turkey Breast Roast, Golden Drummers and Mini Kiev’s were born and supported by national TV advertising, which featured Bernard Matthews describing his Turkey as ‘Bootiful’.  As a result, Turkey become an all year-round meat for most UK households, and the word ‘Bootiful’ became a household phrase.

The 1990s was an era of successful new product launches, more choice and diversification into other meats such as beef, pork and lamb, and some fish ranges were created.

Consumers became more health conscious, seeking more information on where food came from and how it was prepared, convenience and value for money were still equally important. This led to the demand for supporting British locally produced products.

Bernard Matthews responded by focusing on British turkey farming and communicating the health benefits of turkey to UK consumers.

In 2010 Bernard Matthews, founder of the business, sadly passed away aged 80.

In 2016 another entrepreneur Ranjit Singh Boparan purchased the Bernard Matthews business.  Ranjit’s business empire also owns the largest food company in the UK by turnover. So, with the ‘Bootiful’ British Food brand in safe hands a clear vision for further growth was born.  Quite simply make Turkey meat and products the first choice for every family in the UK

Today Bernard Matthews employs over 2,000 people, and is a key supplier of Turkey across the UK. Be it in branded, retailer brand or direct to foodservice. Bernard Matthews are proud to manufacture frozen and cooked meat products to nearly all UK distribution channels, major retailers and catering groups. This means Bernard Matthews products continue to be enjoyed by nearly half the homes in Britain some 66 years later.

We use cookies on our website to give you the most relevant experience by remembering your preferences and repeat visits. By clicking “Accept All”, you consent to the use of ALL the cookies. However, you may visit "Cookie Settings" to provide a controlled consent.
Manage CookiesAllow All
Manage consent

This website uses cookies to improve your experience while you navigate through the website. Out of these, the cookies that are categorized as necessary are stored on your browser as they are essential for the working of basic functionalities of the website. We also use third-party cookies that help us analyze and understand how you use this website. These cookies will be stored in your browser only with your consent. You also have the option to opt-out of these cookies. But opting out of some of these cookies may affect your browsing experience.
Necessary Always Enabled
Necessary cookies are absolutely essential for the website to function properly. These cookies ensure basic functionalities and security features of the website, anonymously.
Functional
Functional cookies help to perform certain functionalities like sharing the content of the website on social media platforms, collect feedbacks, and other third-party features.
Performance
Performance cookies are used to understand and analyze the key performance indexes of the website which helps in delivering a better user experience for the visitors.
Analytics
Analytical cookies are used to understand how visitors interact with the website. These cookies help provide information on metrics the number of visitors, bounce rate, traffic source, etc.
Advertisement
Advertisement cookies are used to provide visitors with relevant ads and marketing campaigns. These cookies track visitors across websites and collect information to provide customized ads.
Others
Other uncategorized cookies are those that are being analyzed and have not been classified into a category as yet.
SAVE & ACCEPT